last saw our heroes, we were on our way to investigate the abandoned military installation with the mass-driver, which would allow us to make it rain nanomachines and remove everyone's Limiters without their knowledge or consent! 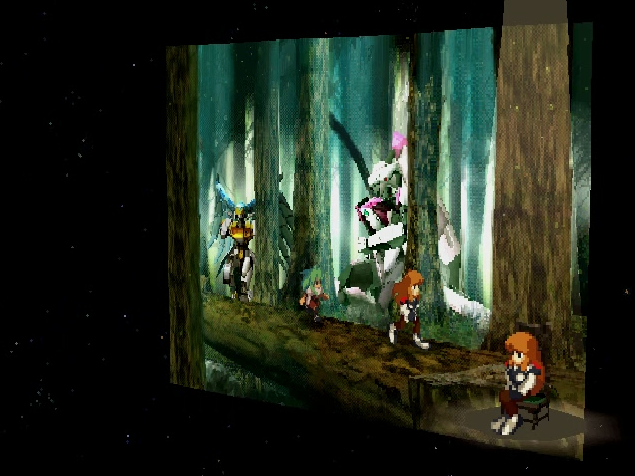 The Mass-Driver Facility is one of the ruins of the Zeboim civilization, which I guess is why I got saddled with Emeralda. Fortunately, the power generator was still running 4000 years after being abandoned, so we made our way through it with little trouble.

You'd think a civilization that came up with infinite and eternal power sources would be less vulnerable to collapsing.

Well, pride and arrogance, I guess, or so the script says. We are shown via several still shots on the projector screen there that the facility was full of rockets and missiles, but we are never even told where this facility is. That would be good to know! Zeboim proper is under the ocean, so... were they under the ocean to begin with? Did they just emerge occasionally in order to install military complexes that would be extremely difficult to reach in an emergency? Did Zeboim sink but somehow remain completely whole and fairly operational? WHO KNOWS. We would if we'd been allowed to actually play any of this would-be dungeon at all, but that dead horse fell to pieces long before this narration got to it.

Once we arrived at the central control room, Citan showed up out of nowhere and helped us activate the Mass-Driver. We succeeded in launching the capsule containing the nanomachines which would release the seal Limiter. So yeah, Taura was talking about Limiters, good. 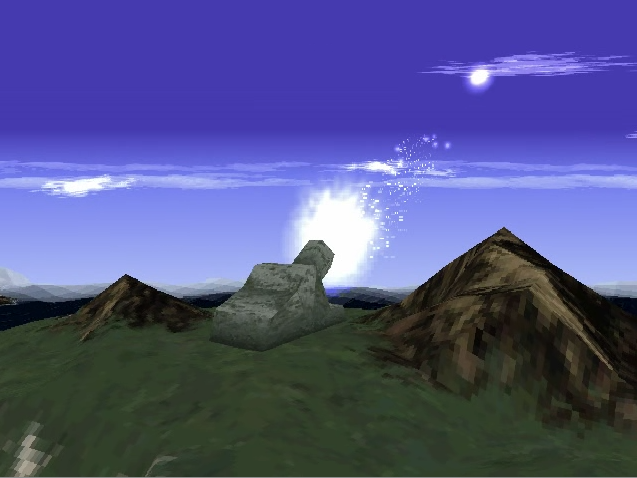 THEY ARE GIRLS, THEY CAN'T WORK MACHINES BY THEMSELVES. Even Emeralda, who is a machine.

Actually, let's pause story-time for a second and talk about Emeralda. There will be more about her later, as she has a sidequest in endgame that I am not skipping for the world, but this narration has been sort of neglecting her as she unfortunately has little bearing on the plot. Emeralda is very, very weird. But in kind of an awesome way?

We've seen her crazy armless robot -- which, despite common sense, is actually one of the better robots in the game -- but that robot has got nothing on Emeralda. Emeralda is pretty much a pile of nanomachines whimsically holding themselves together in the shape of a creepy child, so that essentially makes her a shape-shifter. The game's story doesn't do a whole lot with that, but her fighting techniques... well, she does stuff like this: 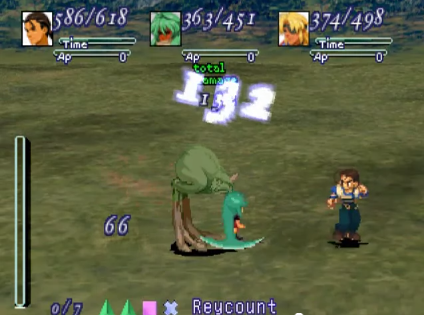 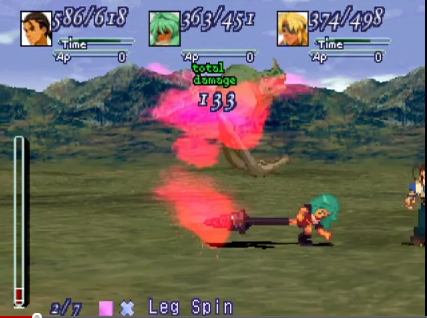 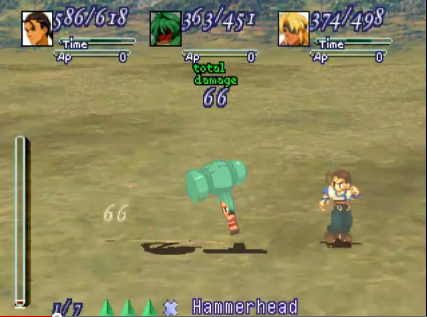 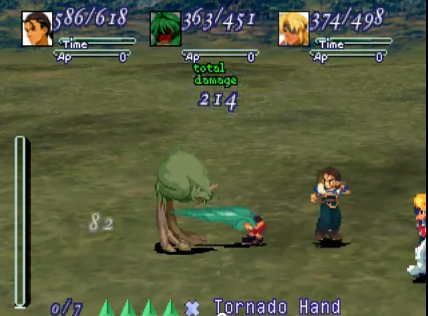 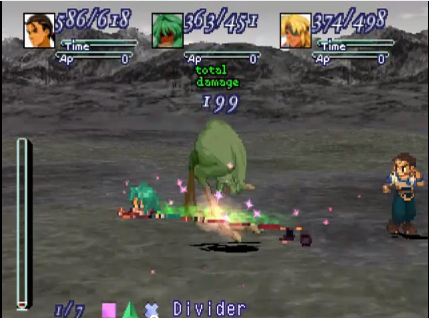 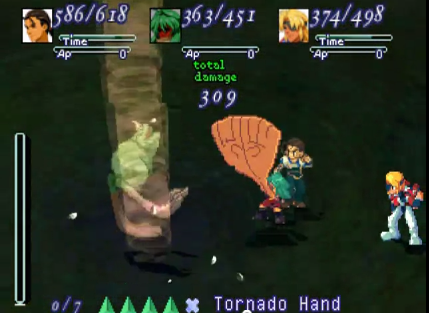 Don't get your moe shit on Emeralda. She will fuck you up with hair in the shape of dental equipment or something. 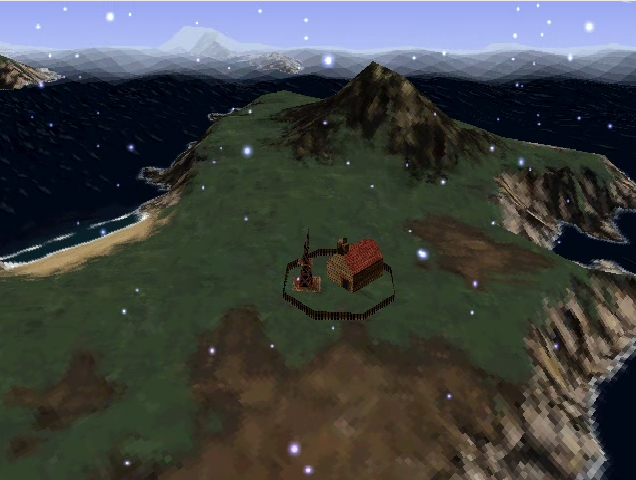 The audience is treated to a creepy Silent Hillesque montage of nanomachines sprinkling themselves all over the world map. Here, for example, is Billy's orphanage! My memory dimly informs me that the children were relocated to Shevat or something, but it could just be lying to soothe this narration's growing distress from the game just blithely adding Billy to the party's permanent roster despite his having nothing much more to do with the plot proper. Best case scenario, those poor orphans are probably dealing with some major abandonment issues. WAY TO BE LIKE YOUR DAD, BILLY.

I have put more thought into this game's characters than the game has. 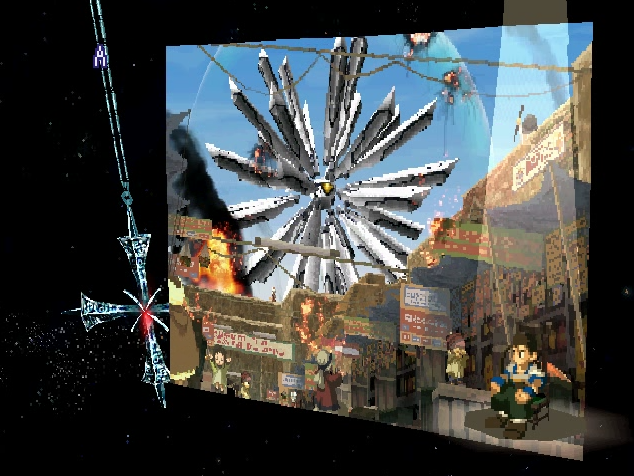 Meanwhile, what is left of Solaris is indeed tearing up Bledavik and is still trying to find their way to Nisan. You guys, it's like right there. Anyway, Fei and company are doing their best to hold them back, but as you can see from the screenshot these things are a little harder to grab onto than flying battleships trying to land on Nortune. BUT SPEAKING OF NORTUNE!

You'll have to excuse me. This is one of the stupidest goddamned things this game does, and this narration is not entirely sure how to describe it. Let's make Fei do it. 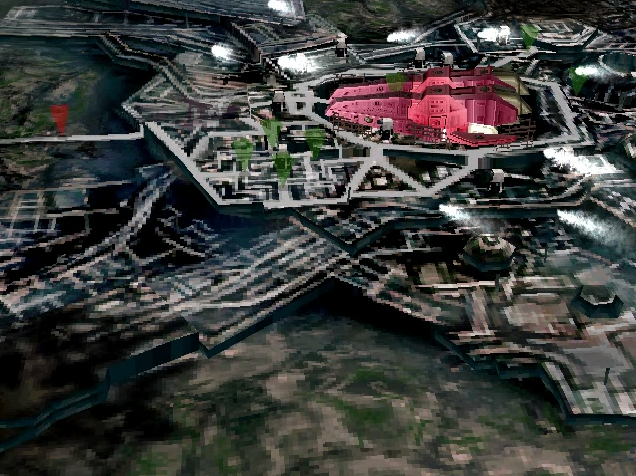 After we pushed back the Solarian Gear units, we headed for Nortune... to the Kislev Capital's administration district. We went there to obtain our one and only means or standing up against the Mobile Weapon. 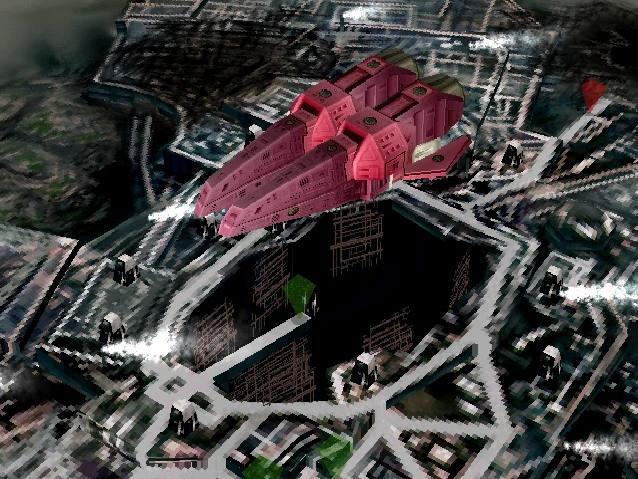 The Kislev capital Nortune's 'Central Administrative District' itself was a secret battleship constructed by Bart's ancestor, Roni Fatima, after the Great War with Solaris many years ago. The existence of the secret battleship remained hidden. Later, the ship was turned into a section of the Kislev Imperial capital during the founding of the Empire. Uncovering the truth from some ancient records, Bart activated the secret battleship in order to fight against the Solarian Mobile Surface Supremacy Weapon. The 'Sand Cruiser Yggdrasil' was actually the center of command and also the main secret weapon of the craft... Awakening from 500 years of dormancy, its true form appeared before us. Commanded by its 'new master', the secret battleship stood before the Mobile Weapon with all of us inside of it.

Know Your Meme does not seem to list the specific reaction face this narration wants to make here, but you can probably guess. 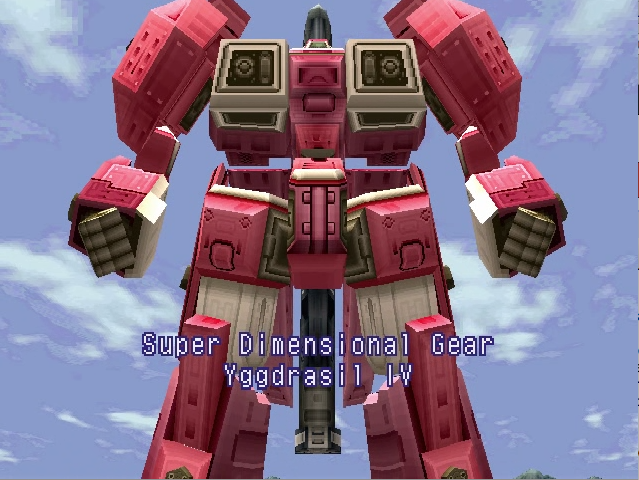 Really? Really? ...Yes, really. You guys, whatever happened to Fort Jasper? Nisan can probably defend itself quite handily at this point! But no, the game has to go and give Bart another overpowered robot he has no idea what to do with. 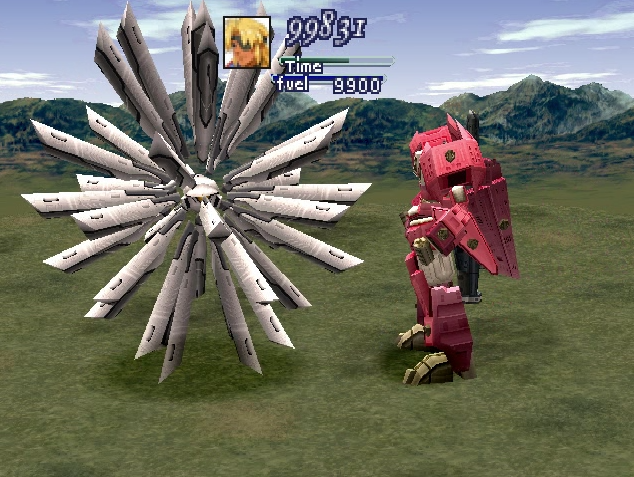 So Bart... does that. You know, the idea of a ridiculously over-sized robot is somewhat acceptable, if only as a nod to the genre, but Kislev has been using this thing as a government building for five hundred years and no one ever noticed it was a robot? No one ever wondered what the engines down in the employee lounge were all about? The navigational equipment in the women's bathroom? Nothing? Is everyone in Xenogears so used to giant robots that they don't even see them anymore? 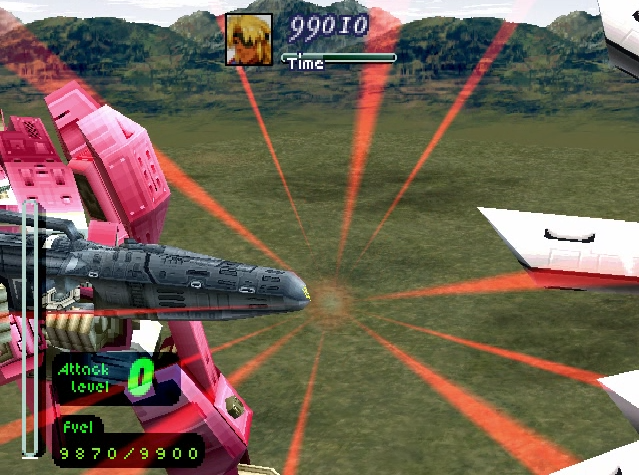 This is way too many screencaps, but this thing is using the normal Yggdrasil as an assault rifle. In my book, that is notable.

It would be hilariously anticlimactic if Bart didn't win here, but yeah, no, Bart wins. Everyone is saved! Aveh and Kislev sign their peace treaty and there is celebration across the land! Why, even the sky is dumping glittering nanomachines on everyone to get this party started! It is a joyous day indeed!

...Wait a second, why is everyone screaming and mutating into monstrous lumps of flesh?

Gee, Fei, I don't know! Maybe you should think about this for a second! 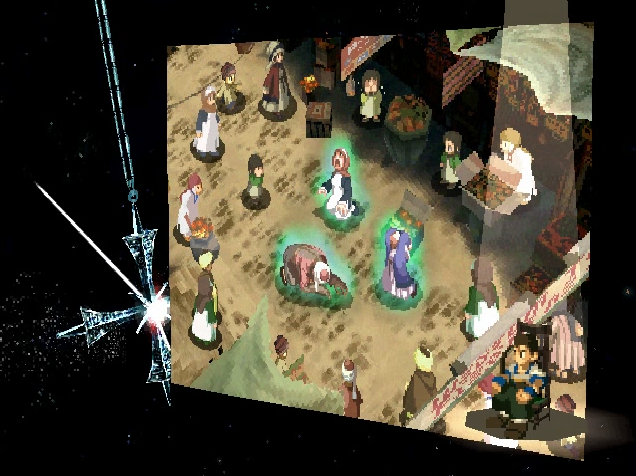 For that matter, maybe anyone should have thought about this for a second! Perhaps dumping nanomachines on the entire population on the say-so of some weird blue guy you found out in the woods is not such a hot idea? So yeah, the nanomachines removed everyone's Limiters, all right, but it seems like there are some factors our friends did not take into account. Like Krelian. And... Krelian. And probably Taura too but mostly Krelian. 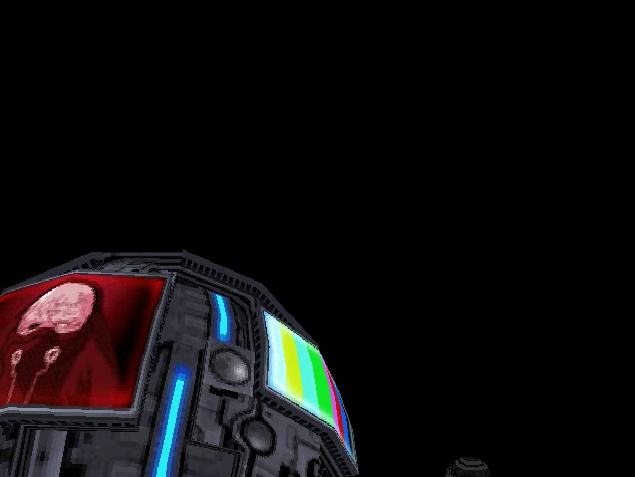 Ah, those who will germinate to become the body of our servant!

That... sure is a lot of those who will germinate to become the body of our servant.

Eh, what can it hurt. 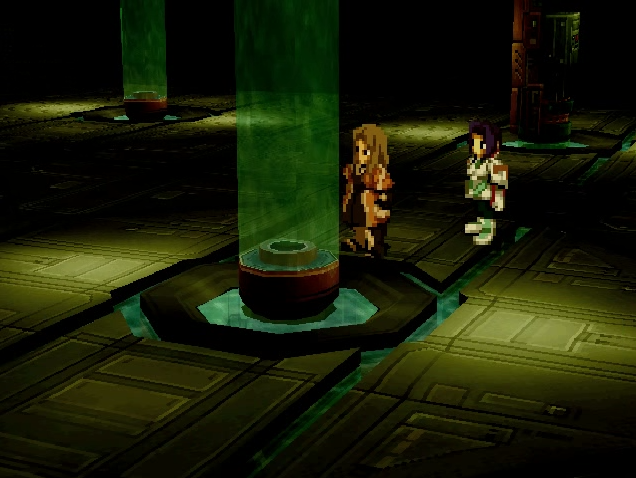 I knew they were going to try to break the seal eventually, so I released my own nanomachines that would attach to their nanomachines and infect people like a virus! Now all the people of the world are mutating into a controllable form that won't have to depend on the KEY to awaken! We're going to create a body for God that will replace the other body of God!

That isn't really what the Gazel had in mind, is it?

Eh, okay. I'll just be siding with whichever of you appears to be winning.

Me. That would be me.

I really, literally, do not care.

Everyone in this game is an idiot except for Miang. Tragically, no one ever seems to figure this out.