We last saw our heroes hanging out on some weirdo's roof. We are about four minutes into disc two at this point, so this narration probably ought to pick up its pace a little. This half of the game is a little dense, plot-wise. Fei says that when Elly came into the kitchen just then, for a moment he was afraid she had forgotten him, because... there was something about her face?

Nothing! You look fine! I just had a weird feeling, like we'd met before!

We have met before.

It's not easy to broach the topic of weird dreams you had while comatose and at the mercy of nanomachines. Elly coughs and says that she doesn't remember what happened after the accident very well, but she remembers someone calling her name, and being covered with something warm. And wet. And sticky. And smelling vaguely of iron. 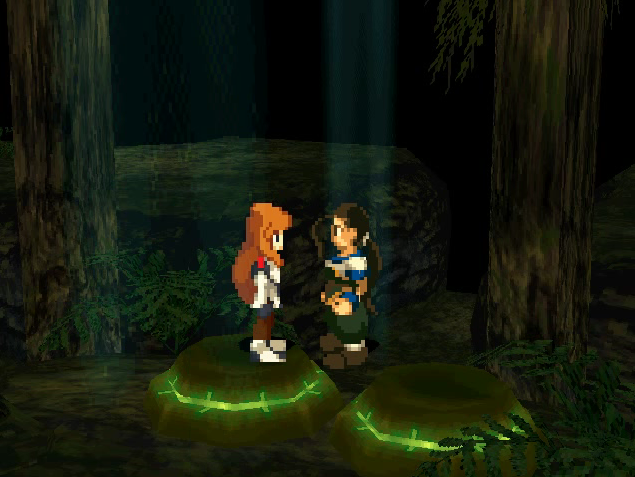 Talking about being drenched in blood is of course extremely romantic! Fei and Elly both go for the kill, but Taura is apparently tired of being alone with Citan.

YOU CAN COME BACK NOW

Not yet thematically appropriate! The yes-no-maybe romantic subplot is wearing a little thin, but we've got terrible, terrible decisions to make here. They head back inside and run straight into more nanomachine nonsense. Taura says he has found a way to remove the "seal" using nanotechnology. ...I think he means the Limiters? I hope he means the Limiters.

If only we could scatter nanomachines all over the unsuspecting populace without doing clinical trials or any sort of research first!

There's an ancient abandoned military installation nearby with something called a mass-driver that can launch a nanoreactor into the upper atmosphere, where it can then rain nanomachines on everyone, in addition to contaminating the world's crops and water supply. You guys, Citan is not a real doctor! And this narration frankly has its doubts about Taura!

Here, take this nanomachine slap bracelet. It will suppress Id.

No, not cool! How are nanomachines supposed to suppress an alternate personality?

Uh, let me check my notes.

This is an 'Emotion Control Device' in which nanotechnology is applied. From this machine shaped as a wristband, nanomachines are infused through your epidermis into your brain. There they refine the SSRI intracerebral substances, such as serotonin, that control emotions.

DID can be treated with Prozac?

This narration actually doesn't know if that's true or not, but it's not betting on it. And can I just say that serotonin is not an SSRI? Serotonin can't selectively reuptake inhibit itself.

You shouldn't use it too often, though, it's hard on the frame.

Taura is one of the three sages of Shevat! We can trust him! 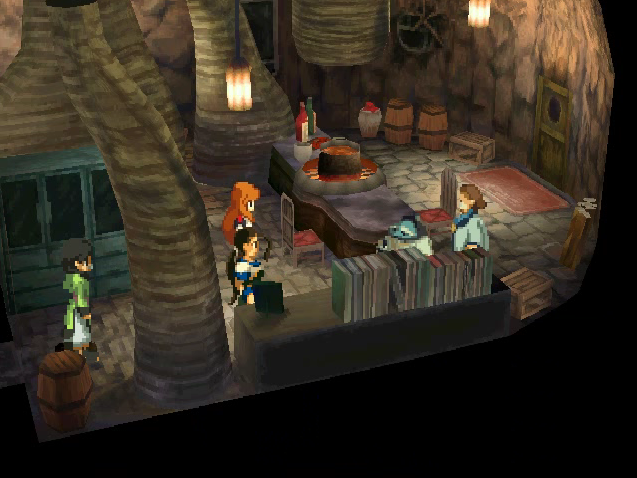 This dumb conversation is interrupted when a guy from Shevat breathlessly comes in to tell Fei that Aveh and Kislev are holding peace talks in Shevat, but that Solaris's mobile weapons are approaching! They've already wrecked half of Bledavik and they'll reach Nisan in four hours! It probably wouldn't take them four hours to reach Nisan from Bledavik on foot, but whatever. Taura is pissed off that Shevat has come running to Fei for help when they were just talking about bricking him in a wall, which is a very good point, but Elly says he should go with them. She'll take care of this mass-driver business!

What was the point of destroying Solaris if all their villains are still running around and they still have the means to destroy a bunch of cities?

Do not worry, Fei, I will go with her! I brought my own Omnigear!

...Why do you have an Omnigear?

It is my old one! I left it with Gaspar in case of emergencies!

How has the entire game not been an emergency?

That's what happens when you go into comas: the party just kind of goes on without you and does a bunch of important stuff offscreen. Someone went and dug up Balthasar from Aveh's desert so he could come here and help Taura fix Weltall, so while it's still no Omnigear, it's at least... better. 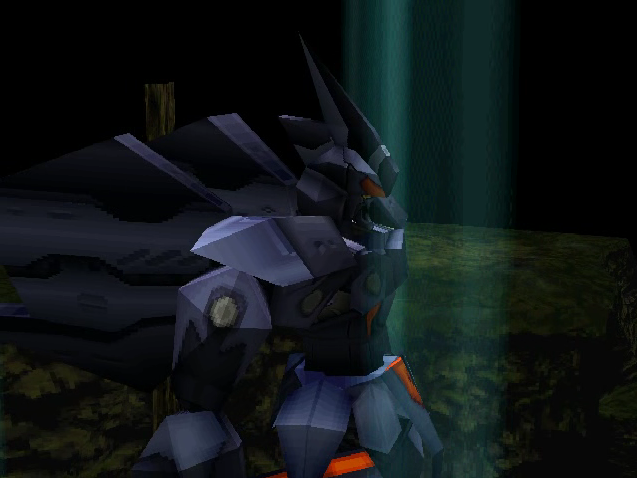 Hm. Yes, Weltall appears to have put on weight. Lord knows how that works.

HOST OF THE SPIRIT OF THE SLAYER OF GOD

Ha ha, yeah, that guy. He seems to have chilled out somewhat, actually. Not having Bart around probably helps. So Fei finally manages to leave Taura's house with the Shevat guy in his pumped up giant robot. Hopefully the Shevat guy has his own robot, as it's been pretty clearly established that Weltall does not have a child's seat. That leaves Elly with Citan again, though Emeralda also popped up at some point. Nanomachine party!

Are you sure you want to go through with this?

I'm pretty sure I'm in love with Fei, so I think we need to be artificially split up for a while.

Ah, that is very wise of you.

Good luck with the mass-driver!

You said you were coming with me!

Emeralda, honey, I don't think an abandoned military installation is a good place to bring a child.

There is some pointless arguing about this, until Citan more or less begs Elly to take Emeralda off his hands. Citan continues to be the worst. Everyone finally gets out of there, leaving Taura to bustle around creepily on his own.

But then! Grahf appears! Kind of. 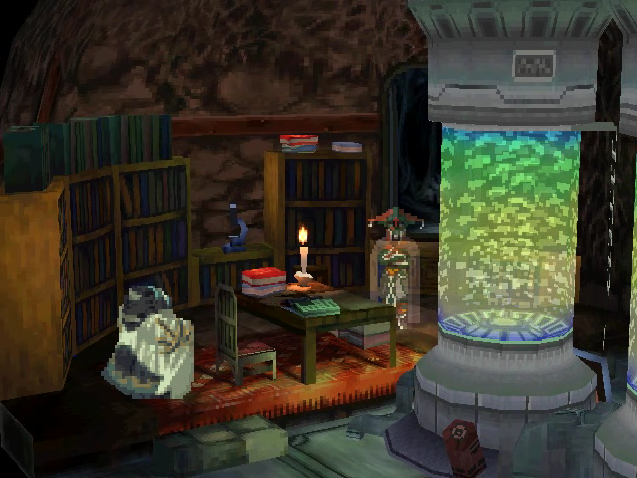 I knew it was you who brought them here! I knew as soon as I saw them, as that boy looks exactly like you. Isn't that right, Lacan?

I left my keys here, give me a break!

Meanwhile, the Gazel are pretty much exactly as we left them. 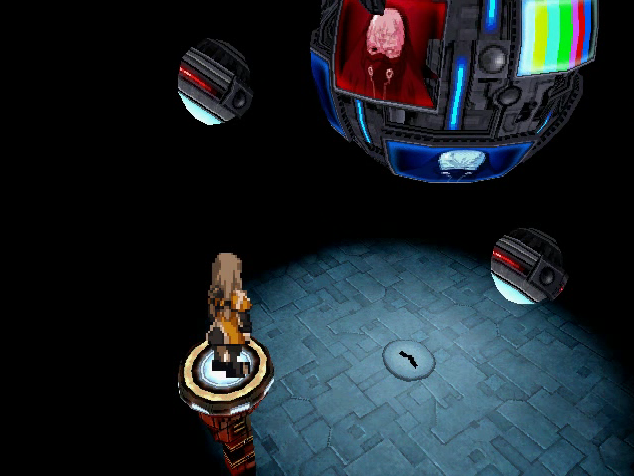 The Contact is still alive! Didn't Ramsus shoot him down?

She was on board his giant robot with him! I can't let her die!

But we already have a Mother! She is just the Antitype!

Krelian rummages around in his coat for a moment and manages to locate his middle finger, which he then shares with his audience. Whatever, he'll just put Ramsus on Fei again now that Fei is alone and tearing towards Nisan. Luckily the memory card saves are still working despite the destruction of Solaris, and the Gazel are able to pinpoint Fei's location. Which is funny, since we haven't been given the opportunity to save in a while.

Then it's only a matter of time before the seal is broken!

What are you muttering incriminatingly to yourself?

So! Who wants to fight Ramsus again! 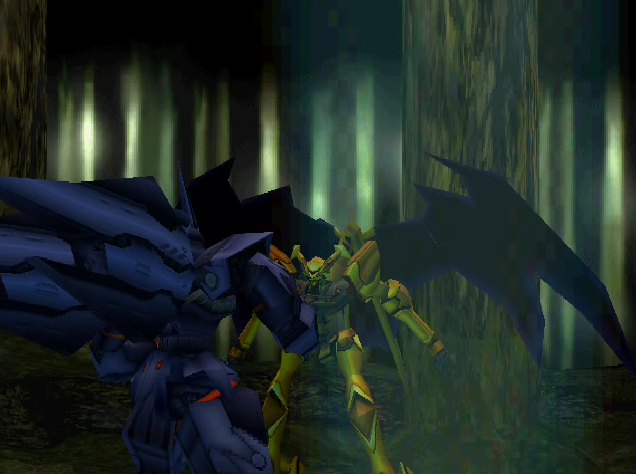 Probably nobody, but do you have any idea how long it's been since the player has been allowed to do anything? So Fei hits that 'grow wings' buttons on his dashboard, and that apparently makes Weltall strong enough to fight Ramsus's Omnigear. Knowing what buttons do what in your giant robot is really important! Weltall doesn't turn red, though, which is a little disappointing. There are yet more buttons left to find. 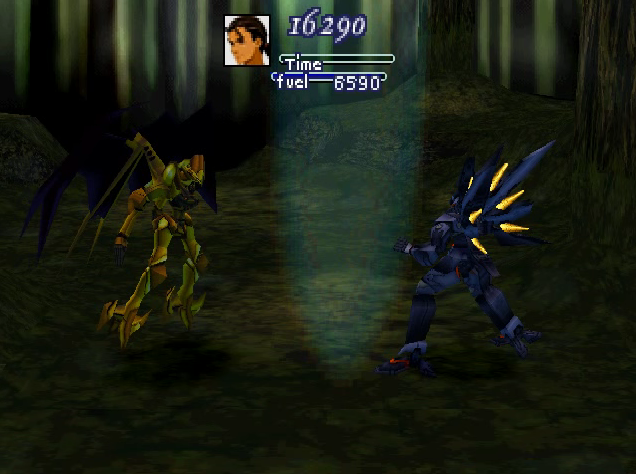 Fei wins! Ramsus is totally traumatized and heartbroken by this defeat.

That seems like a pretty appropriate sentiment from someone who keeps getting humiliated by the same kid, but Fei is weirded out.

I sure hope that was the strangest thing that's going to happen today!